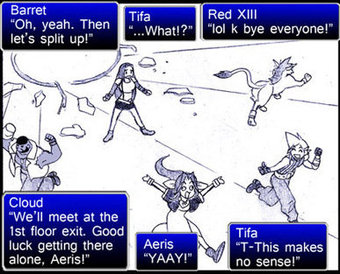 Named after an often-used Catch Phrase from Scooby-Doo, Let's Split Up, Gang! is a common tactical maneuver.

In a RPG with more playable characters than there are allowable party members, there is usually a point in the game during which the party splits into groups in order to accomplish some goal. This is typically a test to make sure that you've been training all the characters, not just the few you always use. Leaked Experience and the Bag of Sharing come in very handy at this point.

Usually accompanied by scrambling to find enough armor or other equipment to cover everybody.

In a horror movie, there is sometimes a point during which the party splits into individual members in order for each to investigate alone. Usually accompanied by dying horribly while Exploring the Evil Lair or getting picked off one by one. This doesn't happen nearly as often as you likely think it does, though.

When just one person suddenly leaves the party without warning, it's a Sneaky Departure. For the opposite, see Never Split the Party. Compare The Fellowship Has Ended, where the team permanently splits up after fulfilling their mission.

Splitting up the party can also allow the writers to keep two plotlines going at once.

Examples of Let's Split Up, Gang! include: