Let the Right One In

Everything About Fiction You Never Wanted to Know.
(Redirected from Let Me In)
Jump to navigation Jump to search 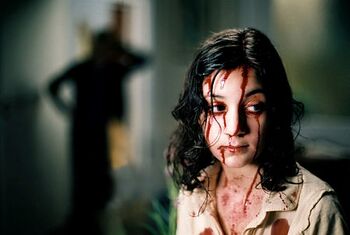 Eli has been 12 for a very long time

Låt den rätte komma in (English: Let The Right One In) is a 2004 horror novel by Swedish author John Ajvide Lindqvist, who adapted his story for the 2008 film version. It's the story of Oskar, a 12-year-old boy who is being bullied at school. One night, he meets Eli, a girl who just moved in next door with her dad. Eli isn't affected by the cold, however, and it's quickly shown her "dad" kills people and drains their blood to feed her. As Oskar befriends Eli and more people go missing, some people start becoming suspicious.

Let The Right One In is most notable for being simultaneously heartwarming and horrifying. Although it has few outright scares, it can be a deeply disturbing movie, as their relationship invokes both young love and a temptation into darkness.

An English-language remake directed by Matt Reeves (of Cloverfield fame) and starring Chloë Grace Moretz (Kick Ass) and Kodi Smit-McPhee (The Road) was released in October 2010 under the title "Let Me In". Reeves used Lindqvist's original screenplay as the basis for his version, but Americanized most of the character names, replacing "Eli" with "Abby" and "Oskar" with "Owen."

Tropes used in Let the Right One In include:
Retrieved from "https://allthetropes.org/w/index.php?title=Let_the_Right_One_In&oldid=1830267"
Categories:
Cookies help us deliver our services. By using our services, you agree to our use of cookies.