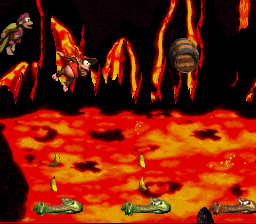 A stage in a video game, particularly platformers, that takes place in a volcanic area, or another area with heat, such as a flaming tower or factory. Almost always features large lakes of liquid lava. The puzzles and challenges in such an area generally revolve around navigating around flames and lava. Generally, the player will be fine as long as he doesn't touch the molten rock, and may be even able to boat across it on some vehicle. Of course, if they do fall into lava, it won't be pretty.

The music in these levels tends to be percussion-heavy and angry and/or mischievous sounding, often with a tribal-sounding chant.

May be a volcano located in Prehistoria.

A Sub-Trope of Lava Adds Awesome.

Examples of Lethal Lava Lands include:

Retrieved from "https://allthetropes.org/w/index.php?title=Lethal_Lava_Land&oldid=1966883"
Categories:
Cookies help us deliver our services. By using our services, you agree to our use of cookies.