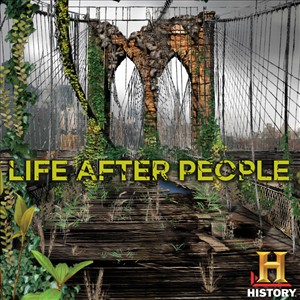 A television special Speculative Documentary film that premiered on January 21, 2008 on The History Channel. A spin-off television series, Life After People: The Series, premiered on the same channel on April 21, 2009; the series touched on many aspects of life on post-human planet Earth that were excluded from the film.

The human race has dominated the planet Earth for the better part of 10,000 years. During that time, we have shaped the landscape to suit our needs, paved over forests and woodlands to create our cities, and created vast monuments that seemingly immortalize the achievements of our species. But what if, one day, the human race suddenly vanished from the face of the Earth? How would the world react to the sudden disappearance of 7 billion humans? How much time would it take before all traces of the human race were erased from the landscapes we once dominated?

Unlike many other, similar programs, Life After People does not concern itself with how humans disappear, only assuming that all of humanity instantly vanishes; the focus is on what happens to the things humans leave behind.

The series not only looks at the theoretical decay of famous and notable structures as well as the everyday, but also takes a look at places that have already been abandoned for decades, and shows how these scenarios are happening even now.

Despite being entirely about a purely hypothetical and arguably unlikely future rather than being about history (making it more of a nature/ecology program than a history program), the original Life After People special became History Channel's highest rated program ever. Although, of course, one could argue that most of the predicted results are accompanied by historical records of what happened - for example at 20–25 years after people, they showed the aftermath of Chernobyl, which was abandoned 20–25 years before the show aired. Other accounts of shorter periods also quoted records of pets eating their owners' corpses for survival if they were locked inside and could not get out to find food. However, this is only a small portion of the show, and most of it is still speculative.

Tropes used in Life After People include:
Retrieved from "https://allthetropes.org/w/index.php?title=Life_After_People&oldid=1431097"
Categories: