The Hitchhiker's Guide to the Galaxy/Life, The Universe And Everything

Everything About Fiction You Never Wanted to Know.
< The Hitchhiker's Guide to the Galaxy(Redirected from Life the Universe And Everything)
Jump to navigation Jump to search 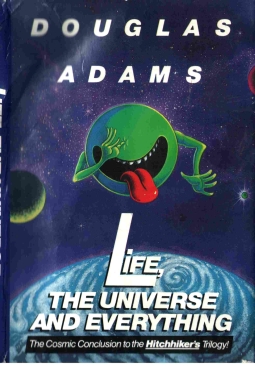 Life, The Universe, and Everything is the third installment of the increasingly inaccurately named The Hitchhiker's Guide to the Galaxy trilogy (although, of course, when it was first published the series was still a perfectly accurately named trilogy). Since franchise creator Douglas Adams had told his original story in its entirety by the end of The Hitchhikers Guide to The Galaxy, this one was a re-imagining of a Doctor Who screenplay called Doctor Who and the Krikkitmen, which Adams wrote but never produced. He simply recast his original idea with characters from The Hitchhiker's Guide to the Galaxy instead of Doctor Who characters, and instant history was made.

Being a Dolled-Up Installment, this book stands out from the rest of the series in two ways. The first is that it's largely self-contained, since it's got a distinct beginning, middle, and ending instead of being one big general mish-mash that hinted at larger things that may or may not come later, like most of the other books. The second is that it's more of a traditional action-adventure sci-fi Space Opera and less of a broad, brainy comedy (though it's still plenty brainy, and plenty funny). The plot has Slartibartfast, the elderly architect first spotted in The Hitchhiker's Guide To The Galaxy, rescuing Arthur Dent and Ford Prefect from prehistoric Earth so they can help him stop the Krikkitmen, a very dangerous and very polite race of alien invaders with a grandiose scheme to kill everything everywhere. The rest of the series' iconic Five-Man Band, Galactic President Zaphod Beeblebrox, Trillian, and Marvin the robot, eventually get involved as well.

Preceded by The Restaurant At The End of The Universe, succeeded by So Long And Thanks For All The Fish.

Tropes used in The Hitchhiker's Guide to the Galaxy/Life, The Universe And Everything include:
Retrieved from "https://allthetropes.org/w/index.php?title=The_Hitchhiker%27s_Guide_to_the_Galaxy/Life,_The_Universe_And_Everything&oldid=1885886"
Categories:
Cookies help us deliver our services. By using our services, you agree to our use of cookies.