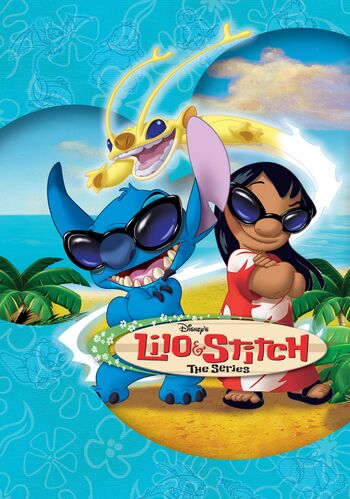 Gotta find the "one true place" for them all!

Lilo & Stitch: The Series (2003-2006) is a sequel series to the Disney movie of the same name, and the first of three in its franchise. After the events of the film, Hawaiian girl Lilo is safe and happy with her sister Nani and their expanded family: alien experimental life-form Stitch, giant four-eyed mad scientist Jumba, and meek cycloptic soldier-bureaucrat Pleakley.

As the series begins, it is revealed that many other experiments of Stitch's lineage, of which he is number 626, have landed near Hawaii by accident (as shown in the straight for video movie Stitch The Movie). Stored in pods that activate one by one in freak occurrences (usually by dropping into water), each specialized experiment uses its unique power to wreak havok on the island until it is captured. Lilo and Stitch's goal is to find a place in which each of Stitch's "cousins" can be useful and happy. Competing with them for each capture is movie bad-guy Captain Gantu, who seeks to enslave the experiments for the even-eviler Doctor Hämsterviel. After three seasons of this, the series closed out with the fourth and final movie, Leroy & Stitch.

Tropes used in Lilo & Stitch: The Series include:
Retrieved from "https://allthetropes.org/w/index.php?title=Lilo_%26_Stitch:_The_Series&oldid=1853683"
Categories:
Cookies help us deliver our services. By using our services, you agree to our use of cookies.