Everything About Fiction You Never Wanted to Know.
(Redirected from Lilo and Stitch (Disney film))
Jump to navigation Jump to search 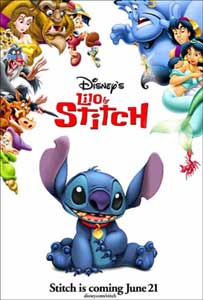 Get your own trope!

Entry #42 in the Disney Animated Canon, this 2002 traditionally-animated science fiction comedy-drama film was critically and commercially acclaimed when it came out, especially considering that Disney Animation was in a lull after the Disney Renaissance ended in 1999. Set mainly in the lush Hawaiian island of Kauai, Lilo & Stitch was a significant breakaway for Disney on many counts, including an unconventional protagonist, "inter-STITCH-al" trailers, the lack of a real villain and the score drawn from home-grown Hawaiian songs and artists - and, of course, Elvis. Unlike other Disney animated films, Disney was hands-off the creative development and did not interfere with the story- director Chris Sanders wanted the film to reflect his own drawing style, and he wrote the entire draft along with his directing partner Dean DeBlois.

Recent orphans of a car accident, sisters Nani and Lilo are practically alone in the world except for each other. Lilo, often lost in her own world, neither understands nor is understood by her hula classmates, and Nani, trying to be responsible, wants to strangle Lilo about as often as hug her. Unbeknownst to them, Dr. Jumba Jookiba, the maddest scientist to splice genetics this side of the Milky Way, stands trial for having created, illegally, a new life form (actually 626 life forms, but it is the 626th that we're concerned with). Stitch has a vast capacity for knowledge, spectacular combat abilities, and a programmed instinct to destroy anything he comes across. Escaping from the United Galactic Federation, Stitch takes a shortcut to the closest planet, which is 70% water (important because he is too dense to swim) - and miraculously lands on the bitty archipelago in the middle of the Pacific, the island of Kauai. He adopts Lilo as readily as Lilo adopts him; however, while Lilo wants a companion, Stitch wants a human shield to deter Dr. Jumba, who is hot on his trail, with the help of neurotic Agent Pleakley. However, Stitch inadvertently learns the meaning of 'ohana: "Ohana means family. Family means, no one gets left behind or forgotten." In other words, True Companions.

The film was both a massive critical and financial success - Stitch quickly skyrocketed into being one of the most popular characters in the Disney Animated Canon, and it launched the directorial career of Chris Sanders and Dean DeBlois, who get a bit of Creator Worship for both this film and Dreamworks' How to Train Your Dragon, as well as engendering some bitterness towards John Lasseter when he fired them from Disney. The film is well-remembered and well-loved for being almost like a Studio Ghibli film in how it deftly mixes humor, strangeness and tear-jerking moments into one cohesive whole - as a matter of fact, Japan loves Stitch. He may even be more popular in Japan than Mickey Mouse himself.

The idea of 625 other experiments by Jumba was inevitably too tempting not to develop into Lilo & Stitch: The Series. A few episodes crossed over with Kim Possible, The Proud Family, Recess, and American Dragon: Jake Long. This series was bookended by Stitch! The Movie, a direct-to-video film which kicked it off and Leroy & Stitch, another DTV film that acted as the finale for the series.

During the creation of the series another DTV film was made. This one was called Lilo and Stitch 2: Stitch Has A Glitch. This movie takes place shortly after the original film, effectively acting as a direct sequel, and before Stitch! The Movie. In it, we discover that Stitch was never fully charged during his creation and suffers fits that revert him to his original programming. Unless he is recharged, he will shut down permanently. Lilo and Stitch 2 was originally slated for a theatrical release, but the poor returns from Jungle Book 2 made Disney reconsider just as the movie was complete and had it released straight to video. The fact that none of the other experiments are mentioned nor Gantu is shown as well as the high production values make this pretty obvious that it was meant to be theatrical. Also included on the DVD was a short film, The Origin of Stitch, which also takes place before Stitch! The Movie.

Stitch's habit of sneaking into other shows and platforms resulted not just in the movie's teaser trailers, but also in a short cameo in The Lion King 1/2 and a role in the Kingdom Hearts video game series.

An Anime series, Stitch!, has been made for the Japanese market and began airing in October of 2008, featuring the new protagonist Yuna. The series established itself as a Time Skip from the original franchise in a 2011 episode where Stitch reunites with an adult Lilo. It began airing on Disney XD in North America on October 24, 2011. In 2017, a Chinese animated series called Stitch & Ai aired. That series, co-produced with American animators (including those from Lilo & Stitch: The Series) saw Stitch separated from Lilo again and ending up escaping to China's Huangshan mountains.

The original film provides examples of:

The sequel Lilo & Stitch 2: Stitch Has a Glitch provides examples of:

The short film The Origin of Stitch provides examples of:

The sequel Stitch! The Movie provides examples of:

Lilo & Stitch: The Series has its own page.

Stitch! has its own page.

Retrieved from "https://allthetropes.org/w/index.php?title=Lilo_%26_Stitch_(Disney_film)&oldid=1965919"
Categories:
Cookies help us deliver our services. By using our services, you agree to our use of cookies.