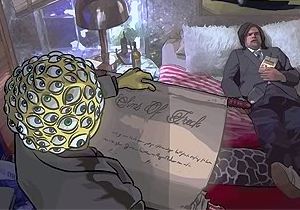 "Your sins will be read to you ceaselessly, in shifts... throughout eternity. The list will never end."

A character is subjected to a Long List of his sins and transgressions, often impossibly long. Alternatively, a character is placed in purgatory or otherwise judged for his crimes, with a convenient long list of crimes at hand, possibly because the Powers That Be have Surveillance as the Plot Demands.

Arson, Murder, and Jaywalking is typically invoked, making this a sister trope. And sometimes the Long List is actually a Short List, because Rule of Funny.

Officer Bob: Kidnapping! Re: restraining liberty for the purpose of terrorizing! Two counts of felonious assault! One count of illegal entry! $4400 in property damage and one count of aggravated menacing with a dangerous kitchen utensil with intent to...
Freddie: ...Castrate me! The crazy bitch tried to castrate me!
Katchoo: Imagine my surprise when I found I didn't have to!

Wanted for crimes against the Galaxy including: Genocide ... Fratricide ... Patricide ... Matricide ... Impersonating a member of the Intergalactic Church of Truth ... Impersonating a member of the Green Lantern Corps ... Carrying a concealed thermo-nuclear device ... Breaking into the Justice League Satellite ... Fishing without a license ... Jaywalking ... Grand theft plasma rocket ... Disturbance of the peace across three space sectors ... 1,978,643,896 unpaid parking permits ... Illegal bounty hunting ... Wanton destruction of government property ... Demolishing a city without a permit ... Reckless endangerment toward animals ... Hijacking ... Selling/distributing radioactive material to cute fluffy bunny rabbits ... Noise infractions level 5.0 ... Illegally poaching Starros ... Bounty Huntering in a restricted zone ... Stepping on the grass ... Defecating in a public garden ... Loitering ... Advocating the overthrow of the heads of state ... Not honoring the bounty hunter code

By the authority of the League of Nations, Baron Heinrich von Helsingard is hereby placed under arrest as an enemy of all mankind for the crimes of kidnapping, human experimentation upon unwilling subjects, and... [flips through the list] Wow. Jeez, that's a lot of atrocities. Where did Helsingard find the time to sleep? [more flipping] I don't even know what this one means.

Narrator: The next thing he knew, a creature from between dimensions was standing at his bed, looking down at him disapprovingly.
Freck: You gonna read me my sins? Eh, it's gonna take a hundred thousand hours.
Creature: Your sins will be read to you ceaselessly, in shifts... throughout eternity. The list will never end.
Creature: (begins reading) "The Sins of Freck."
Narrator: Charles Freck wished he could take back the last half hour of his life.
Creature: "... theft of fingernail clippers..." "... you did knowingly and with malice..." "... punched your baby sister, Evelyn..." "... December, theft of Christmas presents..." "...one billion lies..."
Narrator: One thousand years later, they had reached the sixth grade, the year he had discovered masturbation.
Creature: "... November 14, Percodan... Vicodin... Cocaine..."

Prosecutor: Lincoln Stern, you stand here accused of 12 counts of murder in the first degree, 14 counts of armed theft of Federation property, 22 counts of piracy in high space, 18 counts of fraud, 37 counts of rape...and one moving violation. How do you plead?

Bigamy,
Passing as the Prince of Wales,
Eating spaghetti in public,
Using hard words in a speakeasy,
Trumping partner's ace,
Spitting in the Gulf Stream,
Jumping board bill in seventeen lunatic asylums,
Failure to pay installments on a strait-jacket,
Possessing a skunk,
Revealing the facts of life to an Indian.

He's making a list. He's checking it twice. He's gonna find out who's naughty or nice.

Vimes: Conspiracy to cause an affray, going equipped to commit a crime, threatening behaviour, loitering with intent, loitering within tent, hah, travelling for the purpose of committing a crime, malicious lingering and carrying concealed weapons.
Carrot: I don't think that one --
Vimes: I can't see 'em.

Lawyer: — including more than two thousand cases of Making an Affray, Causing a Public Nuisance, Being Found Drunk, Being Found Very Drunk, Using Offensive Language (taking into account 97 instances of Using Language That Was Probably Offensive If Anyone Could Understand It), Committing a Breach of the Peace, Malicious Lingering, Grand Theft, Petty Theft, Burglary, Housebreaking, Loitering With Intent to Commit a Felony —

Mac: You're under arrest for the murder of Derek James [and] Lauren Salinas, kidnapping and attempted murder of a crime scene investigator, armed robbery, grand theft auto, assault and battery. But most of all, for pissing me off.

Briscoe: I'm trying to decide what to arrest you for - obstruction of justice, harboring a fugitive or just being a general pain in the ass!

Inquisitor: You...are the worst of all... Your crimes are the stuff of nightmares to all decent folk and just ways! YOU ARE AN ABOMINATION UPON LIFE AND DECENCY!!! VANDALISM, BANDITRY, SPYING, PIRACY, ABDUCTION, ILLEGAL USE OF MAGICAL ENERGIES, LOITERING, RESISTING ARREST, and worst of all.... tax evasion. WHAT HAVE YOU TO SAY FOR YOUR HERESY?

Obi-Wan: Let's see... You stole the plans for a symbol of peace. You're allied with (a) a known megalomaniacal warlord and (b) a criminal sociopath. You have not one, but two, armies at your disposal. You've captured me — unfairly — and are holding me with no means of escape. And you're Monologuing.

You read the books / With sticky feathers, / Left books out / In stormy weathers! / Ordered books of lower caliber, / You truly are a sallow shallow bird! / We found your underlines in Milton, / We found you loaned / The books to children!

"Driving without a license, lying on a job application, destruction of private property, destruction of public property, illegal use of toilet plungers, and calling me a heifer! I mean, HONESTLY, Bloo, what do you have to say for yourself?!!

5. "He has dissolved Representative Houses repeatedly, for opposing with manly firmness his invasions on the rights of the people."
24. "He has plundered our seas, ravaged our Coasts, burnt our towns, and destroyed the lives of our people."
27. "He has excited domestic insurrections amongst us, and has endeavoured to bring on the inhabitants of our frontiers, the merciless Indian Savages..."

But this letter is long, Mr. President, and it is time to conclude.
I accuse Major Du Paty de Clam as the diabolic workman of the miscarriage of justice, without knowing, I have wanted to believe it, and of then defending his harmful work, for three years, by the guiltiest and most absurd of machinations.
...
I accuse the three handwriting experts, sirs Belhomme, Varinard and Couard, of submitting untrue and fraudulent reports, unless a medical examination declares them to be affected by a disease of sight and judgment.
I accuse the offices of the war of carrying out an abominable press campaign, particularly in the Flash and the Echo of Paris, to mislead the public and cover their fault.
Finally, I accuse the first council of war of violating the law by condemning a defendant with unrevealed evidence, and I accuse the second council of war of covering up this illegality, by order, by committing in his turn the legal crime of knowingly discharging the culprit.
I have only one passion, that of the light, in the name of humanity which has suffered so and is entitled to happiness. My ignited protest is nothing more than the cry of my heart. That one thus dares to translate for me into court bases and that the investigation takes place at the great day!
I am waiting.