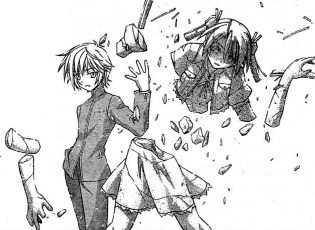 Anybody have some glue handy?

Someone gets frozen or Taken for Granite, and is then smashed into itty-bitty pieces. A great way to make sure that someone is Deader Than Dead and to make Harmless Freezing not so harmless. In gaming, this falls under the Chunky Salsa Rule and guarantees instant death, although this could destroy their equipment as well.

However, it can occasionally be counteracted by the victim Pulling Themselves Together or restoring themselves From a Single Cell.

Examples of Literally Shattered Lives include:

Retrieved from "https://allthetropes.org/w/index.php?title=Literally_Shattered_Lives&oldid=1859542"
Categories:
Cookies help us deliver our services. By using our services, you agree to our use of cookies.