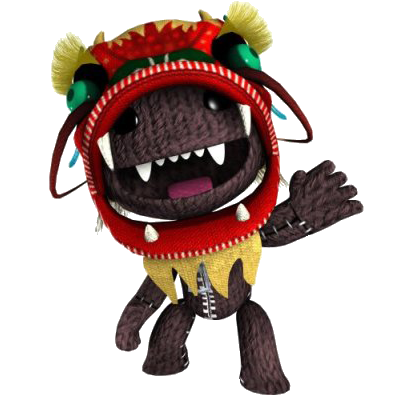 Awww, isn't he just the cutest?

LittleBigPlanet is a video game on the Play Station 3, and was supposed to be one of its killer apps. It's based on the basic idea of customizable, user-created funhouse levels. Critics loved it (for example, it received a perfect 10 in Edge), but initial sales were disappointing (they got better). This is possibly because it was one of the greatest 2D (okay, 2½D) platformers ever made... at a time when 2D platformers were about as relevant to gaming culture as Vaudeville is to Broadway theater. (at least in the U.S.)

However, this doesn't stop the number of user-generated levels from reaching over two million as of this writing.[when?] As Wikipedia puts it, its gameplay "revolves around the player's control of small avatars, known as Sackboys or Sackgirls owing to their Stitch Punk appearance, in a variety of platforming scenarios. Though the game features a set of pre-built levels for players to explore, of equal importance is the game's customizable nature, from altering the player's character and personal space, to building entirely new objects and levels, and then sharing and playing them online as part of the LittleBigPlanet community." It includes narration by Stephen Fry. That's right, The Hitchhiker's Guide to the Galaxy is now your Guide to this galaxy.

Did we tell you that there's a game on the PlayStation Portable with entirely different levels but the same gameplay and features? And a sequel on the Play Station 3, LittleBigPlanet 2, which dramatically improves the editing tools available for the players? And an installment for the Playstation Vita? And a... kart racing game?

Did you also know about the upcoming[when?] LittleBigPlanet 3 for the PlayStation 4?

Tropes used in LittleBigPlanet include:

Retrieved from "https://allthetropes.org/w/index.php?title=LittleBigPlanet&oldid=1855468"
Categories:
Cookies help us deliver our services. By using our services, you agree to our use of cookies.