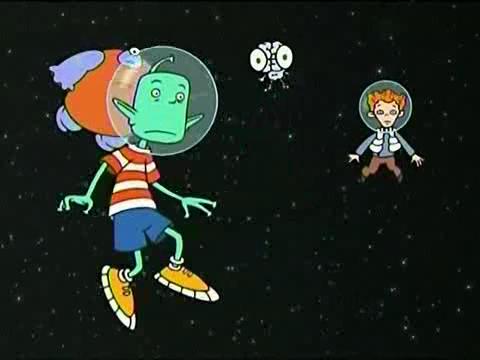 Lloyd in Space was an animated television series, running from February 2001 to February 2004 for a total of 40 episodes in four seasons.

Living far in the future, shortly after the end of World War Nine, Lloyd Nebulon is a green-skinned alien (of the Verdigrean race) with strange ears and a single antenna sticking from his head. Lloyd lives in the Intrepidville Space Station along with his telekinetic and telepathic sister, Francine, and his mother, Commander Norah Li Nebulon, the Head of Intrepidville. Lloyd's friends are Eddie R. Horton (a ginger-haired American teenage human), Kurt Blobberts (an enormous purple blob with a single eyeball and simple intelligence, of a species known as the Blobullons), and Douglas McNoggin (a giant brain with arms, feet, eyes and a mouth, of a species known as the Cerebellians).

From the creators of Recess.

Tropes used in Lloyd in Space include:

Nora: I'll turn this universe upside-down to find you, Lloyd.