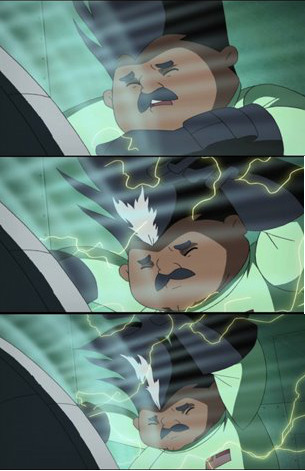 Let's say you're a typical protagonist, and you've stumbled upon a MacGuffin or had some kind of incredible, scarring experience. It tends to change you—and it especially tends to change your hair. Skunk Stripes, Multicolored Hair and more are common mementos left on your once lovely locks.

Compare Power Dyes Your Hair, which is strictly supernatural, often coming and going with the phenomenon causing it; and Disease Bleach, which occurs as a result of more mundane causes and isn't spontaneous. See also Shapeshifter Mode Lock and Shapeshifting. Contrast Kaleidoscope Hair, when the change isn't permanent and can happen for other reasons.

As a trauma trope, expect spoilers.

Examples of Locked Into Strangeness include:

Retrieved from "https://allthetropes.org/w/index.php?title=Locked_Into_Strangeness&oldid=1804727"
Categories:
Cookies help us deliver our services. By using our services, you agree to our use of cookies.