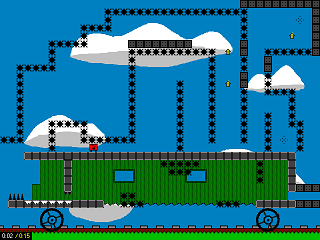 It's very common for our protagonists to find their way onto a train. After all, it's a prime location for adventure. You're stuck in a confined space, and you're unable to leave once the train is moving. You may have to show your ticket or passport, you may be held up by a bunch of robbers, you never know who you're going to meet, and nobody is ever completely sure if that strange-looking toilet door is correctly shut.

After you've run around on the train for long enough, the only way left to go is up, often leading to a Traintop Battle. The music will often have a gallop rhythm.

Not to be confused with Rail Shooter.

Examples of Locomotive Level include:

Retrieved from "https://allthetropes.org/w/index.php?title=Locomotive_Level&oldid=1498240"
Categories:
Cookies help us deliver our services. By using our services, you agree to our use of cookies.