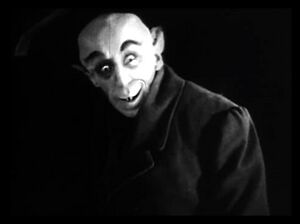 The count himself... smirking.

History time: In the original folklore, most vampires were short, ugly, Eastern European peasants. Then Polidori creates the character of Lord Ruthven and suddenly they're all elegant, English, aristocratic and look suspiciously like Lord Byron. Rymer's Varney the Vampire gives them fangs, but makes no real change beyond that. Then Sheridan Le Fanu's Carmilla was written, and vampires suddenly became angsty, alluring, bi-sexual upper-class gothic girls. Then, Dracula was written, and they're elegant, Eastern European aristocrats, sexy and deadly, outwardly beautiful yet disguising an inner corruption. Thus, horror turned to fetish, and pop culture the world was never the same again.

In the early '20s, F.W. Murnau had a great idea. Since the German Expressionist movement was all about stylization, why not apply this to vampires? Why not create a vampire that looks exactly like what he is: a parasitic bloodsucker? And so, Nosferatu got made, and very nearly destroyed.

But Murnau's character, Orlok, played by scary-ass stage actor Max Schreck, has become one of the most iconic vampires ever, and has spawned a flock of imitators, typically used as a contrast to the elegant, pretty vampires, who for some reason are more likely to be treated sympathetically, or at least respectfully.

In order to qualify as a character who Looks Like Orlok, they must possess some combination of the following:

Part of Murnau's intention was to make Orlok look like the plague-carrying rats to which he is explicitly compared throughout the film.

A form of Our Vampires Are Different; see also Classical Movie Vampire (resembling Bela Lugosi, who codified the look). Compare Looks Like Cesare. Also known for their Pivotal Wakeup.