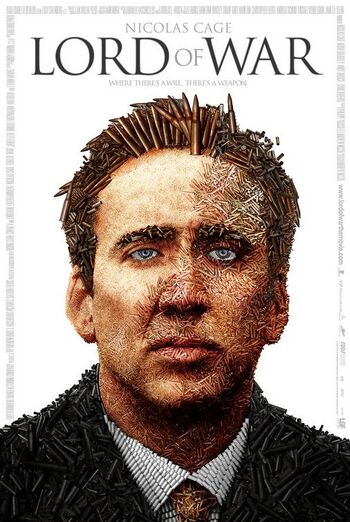 A 2005 political crime thriller staring Nicolas Cage, Bridget Moynihan, Ethan Hawke, Jared Leto and Eamonn Walker. It revolves around Yuri Orlov, Ukrainian-American arms merchant extraordinaire, based on the Real Life Russian traffickers Viktor Bout and Leonid Minin. The film starts out with Yuri Orlov (played by Cage) standing amid a pile of shell cases with combat in the background, telling the audience how the world has enough guns in circulation for one out of every twelve people - five hundred and fifty million in total. The only question, he continues ... is how to arm the other eleven.

Tropes used in Lord of War include:

Yuri: How many Kalashnikovs do you have?
Uncle Dimitri: Forty thousand.
Yuri: Is that a four? Doesn't look like a four to me. Looks more like a one.
Uncle Dimitri: [Looks at clipboard] No, it's a four.

Yuri Orlov: Curious how you always revert to your native tongue in moments of extreme anger... [cut to Yuri and Vitaly having sex with two girls they picked up] and ecstasy.

"That rarest of law enforcement officer...unwilling to break the law himself" in order to catch Yuri.

I prefer it my way.

Yuri: I never sold to Osama bin Laden. Not on any moral grounds; back then, he was always bouncing checks.

Yuri: "I guess they [African militants] can't own up to what they usually are: a federation of worse oppressors than the last bunch of oppressors. Often, the most barbaric atrocities occur when both combatants proclaim themselves freedom-fighters."

"I would tell you go to hell... but I think you're already there."

Yuri: Ah, the new MP5. Would you like a silencer for that?

I prefer it my way.