The Lord of the Rings

Everything About Fiction You Never Wanted to Know.
(Redirected from Lord of the Rings)
Jump to navigation Jump to search 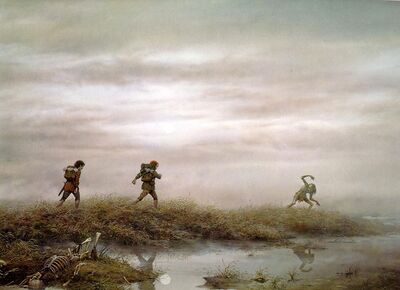 "Are We There Yet??" "Almost, precious, give or take another twelve chapters."

With those words, Sauron forged the One Ring, the vessel of his power and the pivot on which the fate of Middle-earth would turn for five thousand years—until the most unlikely of heroes did the one thing Sauron could never have imagined, and brought his dark tower tumbling down.

The story was originally intended as a shorter sequel to The Hobbit, but as its author famously remarked, "the tale grew in the telling." The Lord of the Rings by JRR Tolkien is too well-known, and too complex, to be summarised in full. Succinctly, it is by far the most recent addition to the Canon of Western epic literature and is, in the words of Jude Fisher, the "Ur fantasy trilogy", which set the stage for the entire modern genre that followed in its wake.

In addition, there has been a BBC radio adaptation, three Tabletop RPGs set in Middle-earth, and several video games or mods. There is also a tabletop miniature game by Games Workshop, and a board wargame was published by Simulations Publications, Inc. in the late 1970's.

The first attempt to make a screen version was made in 1958 by a certain Zimmerman, who wrote a film script for The Lord of the Rings. J.R.R. Tolkien looked through it and in his letter to Forrest Ackerman heavily criticized this feeble attempt. It turned out that the script didn't reflect many of Tolkien's thoughts and some of the characters lost their appeal.

There was another aborted attempt by John Boorman to adapt the books in the 70's. It would've been live action and the notes from it might have suggested that adaptation might have looked like Zardoz. The Harvard Lampoon published a parody titled Bored of the Rings in 1969, which manages to cover the entire journey in under 200 pages.

The majority of tropes used in LotR are well-explained, unlike in the majority of its imitators. For instance, Mordor has large fertile areas offstage where food is grown, thus explaining how Sauron's armies survive in the volcanic hellscape around Barad-dur. The Ring is also more than just a convenient MacGuffin—its effects matter too much for that. This is largely due to the immensely elaborated Backstory and Tolkien's life-defining experiences in The Great War.

There were, though, some tropes JRR Tolkien couldn't justify to his satisfaction, not helped by the fact that he updated his mythos constantly over a period of years, creating a minor Continuity Snarl at times but never quite reaching the Shrug of God. He spent years trying to decide how orcs could be Exclusively Evil without being born evil or soulless - since Eru would not give creatures born evil souls, on moral grounds, Morgoth was unable to create souls, and Tolkien believed anything without a soul would be a mere animal - but he never found any answer he liked. It was philosophical niggles like this that stopped him from publishing The Silmarillion in his lifetime. His son Christopher did it anyway, to the delight of all Tolkien scholars, and most of his readers.

Please note that this is the page for tropes used in the book. See above for the links to pages for the movies.

Retrieved from "https://allthetropes.org/w/index.php?title=The_Lord_of_the_Rings&oldid=1949866"
Categories:
Hidden category:
Cookies help us deliver our services. By using our services, you agree to our use of cookies.