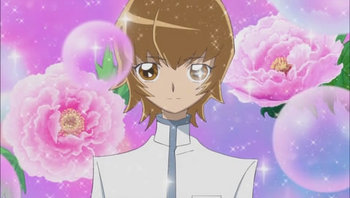 From the vision of one lovestruck girl.

A romantic moment in anime is often accompanied by a pastel background with lots of bubbles. Nobody knows who wanders into all these series with an invisible bubble machine, but maybe they should stop before they get soap in somebody's eye...

This is a technique taken directly from manga, and often accompanied by a Bishie Sparkle for one or both of the characters involved.

Alternately, the background may have a floral pattern rather than a bubble pattern. In yuri manga, the flowers may be lilies, because yuri literally means "lily". Roses are common otherwise, although any kind of flowers may be used, at the artist's whim, including odd things like passionflowers and clematis.

Examples of Love Bubbles include:

Retrieved from "https://allthetropes.org/w/index.php?title=Love_Bubbles&oldid=1895247"
Categories:
Cookies help us deliver our services. By using our services, you agree to our use of cookies.