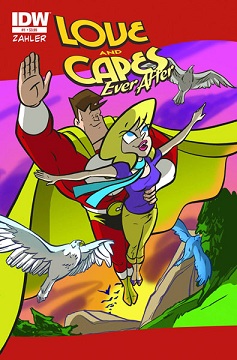 Can you read my mind?

Abby Tennyson is starting a relationship with her accountant, Mark Spencer. Sure, he's a bit clumsy, busy at odd times, and very different from the sort of guys she usually dates, but there's a real connection there. And Mark, for his part, loves her dearly. He just has to get ready to tell her the biggest secret of his life.

He's actually The Crusader, one of the world's most powerful superheroes.

Love and Capes is, at its heart, a romantic comedy that shows the progress of Abby and Mark's relationship — the mundane (dealing with Mark's highly critical mother), the not-so-mundane (such as the fact that one of Mark's ex-girlfriends is Amazonia, who has much the same power set at he and who wants to get back together with him), and the more four-color problems that only superheroes have to deal with (an Evil Twin and the like).

By artist Thom Zahler, it can be read online here.

Tropes used in Love and Capes include:
Retrieved from "https://allthetropes.org/w/index.php?title=Love_and_Capes&oldid=1638243"
Categories: