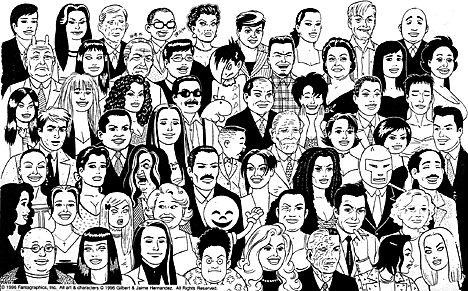 Loads and Loads of Characters

Love and Rockets is a long-running black-and-white comic book anthology series created by Gilbert, Jaime, and to a lesser extent Mario, Hernandez, often credited as "Los Bros Hernandez". The comic began when the brothers self-published their first issue and sent it to The Comics Journal for review. It impressed the people there so much that the magazine's publishers, Fantagraphics, decided to republish the comic and give the brothers an ongoing series.

The original Love And Rockets ran for fifty issues before a hiatus began in 1996, during which the brothers worked on other projects mainly spun-off from their ongoing plots. A "Volume 2" series began in 2001 and ran for twenty issues until 2007. In 2008, Los Bros bowed to the move from individual issues to larger bound volumes as the primary medium for art comics, and began an annual "Love and Rockets: New Stories" series in book format.

While the series contains a number of one-off short stories, the majority of the issues deal with one or both of two long-running serials. The first is Gilbert Hernandez's "Palomar" stories, a series on the borders of Slice of Life and Soap Opera, covering several decades in the history of the people of the small Mexican village of the title, in the village itself and elsewhere in Mexico and the USA. The second is Jaime Hernandez's "Locas" series, dealing with the lives of two Hispanic-American friends and occasional lesbian lovers, Maggie and Hopey, and the characters who circle around them. The "Locas" stories initially had prominent pulp-SF and superhero elements, but soon became more naturalistic stories set in the working-class punk and/or Latina subcultures in California.

Not to be confused with the Bauhaus spin-off band, although they did name themselves after this comic.

Tropes used in Love and Rockets include:

The "Palomar" stories contain examples of:

The "Locas" stories contain examples of:

Retrieved from "https://allthetropes.org/w/index.php?title=Love_and_Rockets&oldid=1848767"
Categories:
Cookies help us deliver our services. By using our services, you agree to our use of cookies.