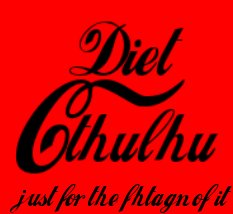 Oh no! The Cult of KRZY has read from the Book of Darned Awful Things and unleashed the dreaded might of Yog-Sofserve, the Black Goat with Thirty-One a Thousand Flavors! Yep, it's end of the world time. But wait! Those big darned heroes showed up and shoved old Yog back into his book. Crisis averted! And nobody went gibbering insane!

Where the traditionally Lovecraftian Cosmic Horror Story tries to unleash an emotional whammy of despair and hopelessness on the characters and the audience, Lovecraft Lite has a more modest aim. It uses the toys and themes of Trope Codifier H.P. Lovecraft and tell a different, more optimistic kind of story in the genre of Speculative Fiction. In a Cosmic Horror Story, hope is gone. Lovecraft Lite, though, doesn't have the same hopelessness and ends up being more of an adventure or comedy that just so happens to take place in a similar setting. So it's basically a Cosmic Horror Story on anti-depressants. May sometimes cause cases of Vile Villain Saccharine Show if said abomination clashes too much with the tone of the show.

Since part of the definition of the Cosmic Horror Story is that mankind has no chance at even comprehending the hideous Truth of the universe, let alone fighting it; any series where someone can say Did You Just Punch Out Cthulhu? is closer to Lovecraft Lite than Cosmic Horror Story. Sometime this is done by having bigger fish on hero's side, possibly as a Big Good. Compare/contrast also with Cthulhu Mythos, Did We Just Have Tea with Cthulhu? and Did You Just Romance Cthulhu?[1]

Examples of Lovecraft Lite include:

Retrieved from "https://allthetropes.org/w/index.php?title=Lovecraft_Lite&oldid=1899037"
Categories:
Cookies help us deliver our services. By using our services, you agree to our use of cookies.