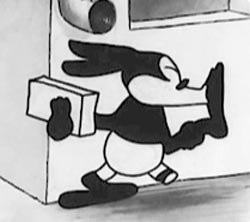 Taking "You make your own luck" literally.

Lucky Rabbit's Foot refers to the association between rabbits and luck. A variety of cultures use the foot of a rabbit as a good luck charm. In some traditions, the rabbit from which the foot is obtained must have certain properties and be killed in a certain way. However, in other practices, just any old rabbit foot will do.

The practice of using a lucky rabbit's foot is usually depicted as something that only applies to people owning the feet of dead rabbits. Sometimes humans attempting to obtain a lucky rabbit's foot may lead to a chase because the rabbit would prefer to keep his feet. If he's a Rascally Rabbit, then the human can be the unlucky one as the rabbit uses his trickery to defend himself.

More benign examples of this trope include a live rabbit that benefits from the luck of his own feet, or is able to give luck to people without being killed himself.

Another superstition that associates rabbits and luck is that saying "Rabbit Rabbit" or "White Rabbits" at the beginning of the month will bring luck. It is also considered good luck for a rabbit to cross your path.

Examples of Lucky Rabbit's Foot include: