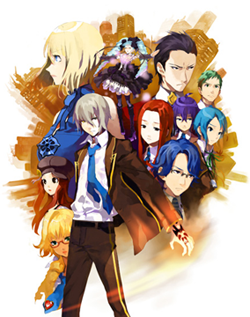 Lux-Pain is a Visual Novel-type Adventure Game for the Nintendo DS, first released in Japan in March 2008. The English translation was released in the US and Europe a year later, in March 2009.

Atsuki Saijo's parents were victims of SILENT, a mental parasite born through negative emotions that drives its victims to violence and suicide. To avenge them, he joins FORT, an organization formed to eliminate SILENT forever, and acquires the power of Lux-Pain. He is dispatched to Kisaragi City to search for the "Original" SILENT that started the "Shanghai Incident", in which 10,000 people were infected by that one "Original" in just three months, resulting in thousands of violent crimes and suicides.

As part of his investigation, Atsuki is enrolled in Kisaragi High as a transfer student, where he meets various classmates and teachers, many of whom have some connection to the mystery. Atsuki's investigation is aided by an ability known as Sigma (short for Signum-Anima) and other FORT members. Sigma allows Atsuki to read Shinen, a collection of thoughts and emotions, shown as words that flash across the screen in various colors and text effects. These thoughts allow Atsuki to gain an understanding of events and of the mental state of the people they belong to, potentially discovering a SILENT and eliminating it. (If he locates a SILENT or WORM - a lesser form of Silent - and fails to remove it, the SILENT or WORM victim's brain will be 'broken' and it's a Game Over.) Other FORT members assisting Atsuki include his partner Liu Yee, a fellow Lux-Pain user whose methods are rather more ruthless than Atsuki's; Natsuki, a young girl whose Sigma power allows her to track Shinen; and Nola, Atsuki's support and an expert hacker.

There is a Character Sheet for this section.

Tropes used in Lux-Pain include: