Everything About Fiction You Never Wanted to Know.
< Mad
Jump to navigation Jump to search 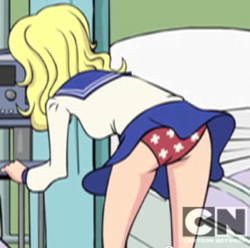 Well, the cartoon is rated TV-PG (and it is said to be the revamped version of Mad TV, which was rated TV-14 and not meant for children to begin with, despite its many Subverted Kids Show sketches, both animated and live-action), so a page like this is expected, but even by Cartoon Network's standards (if any) for PG-rated shows outside of Adult Swim, the writers do manage to sneak some stuff in that makes viewers wonder/exclaim, "What Do You Mean It's for Kids?!"