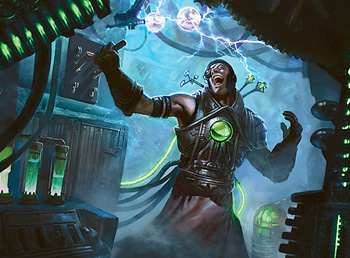 They're scientists, they're somewhat scatterbrained, their practice is questionable, and they are frequently working for the bad guys, building implausible gadgetry, or slightly ridiculous superweapons. They tend to wear lab coats, have either wild hair or total baldness, and speak with fake Central European accents. Sometimes they will engage in Sesquipedalian Loquaciousness.

Mad Scientists tend to have vast stockpiles of Applied Phlebotinum available. They do a lot of hand-waving and cackling as they construct or summon the Monster of the Week or repair the villain's Humongous Mecha, which is usually only dimly visible in a gigantic foggy cloud of expository Techno Babble. When confronted about their amorality, expect them to shout that the true value of their work is "For Science!!"

When the specifics of the mad scientist's theories are delved into, they often become Theory Before Phenomenon, unless the scientist has been driven mad by some piece of evidence he saw and wants to prove was real. The Mad Scientist traditionally has a beautiful daughter for the hero to fall in love with.

An increasingly common take on this trope is that Mad Science is a disease, either hereditary in which case the afflicted may come from a long line of mad scientists, or transmissible through contagious ideas or revelations. Since Insane Equals Violent, the transformation associated with contracting Mad Science can often be a dangerous one, involving the sudden invention of a Killer Robot, Death Ray or other instances of implausibly fast engineering.

When there are more than one or two Mad Scientist in a work, they will often specialize, becoming an Evilutionary Biologist or perhaps a mad computer scientist. Of course, specializing in some mad -ology usually involves disagreeing with the current standard explanations in the field, or at least believing that there are some important experiments everyone is ignoring (probably because they are unethical). See also TV Genius, Evil Genius, Science-Related Memetic Disorder, and, inevitably, Scale of Scientific Sins Compare Absent-Minded Professor.

Note that in Real Life, a scientist performs experiments and an engineer makes things. The only reason we have "mad scientists" (insane data collection...?) and not "mad engineers" (crazy gadgets) is that most adults don't know the difference, and perpetuate that misunderstanding. Also, "scientist" sounds significantly more arcane and exotic than "engineer" for some reason.

Examples of Mad Scientist include:

Retrieved from "https://allthetropes.org/w/index.php?title=Mad_Scientist&oldid=1967439"
Categories:
Cookies help us deliver our services. By using our services, you agree to our use of cookies.