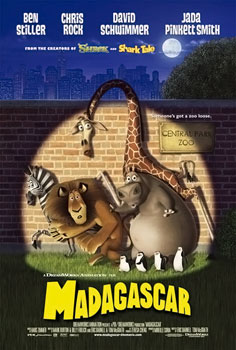 Madagascar is a successful 2005 computer-animated comedy produced by Dreamworks Animation. The movie is about four friends- Alex the Lion, Marty the Zebra, Gloria the Hippo and Melman the (hypochondriac) giraffe- who live in New York's Central Park Zoo. Since they have lived their whole life in the zoo they are unaware of what the wilderness is like or the fact that Alex is their natural predator. After they are shipped off to a wildlife reserve for escaping, they become shipwrecked on the coast of Madagascar. There they meet a society of lemurs and Alex's true nature starts to emerge.

In late 2008 a sequel titled Madagascar: Escape 2 Africa came out. The sequel takes place shortly after the first movie. The penguins fix a crashed airplane and the zoo animals (plus King Julien and Maurice) try to fly back to New York but run out of fuel (or perhaps more accurately, run out of plane) and crash. They land in a wildlife reserve and discover not only that there are others like them, but the Lion pride that runs the place is Alex's family.

A third film titled Madagascar 3: Europe's Most Wanted came out June 8, 2012. The animals are still trying to find a way back to New York, and end up journeying to Europe, where they find help in a traveling circus. Another sequel had been considered but may not happen now that they canceled most of their other sequels they had contemplated making 5 years from now.

There have also been two Christmas Specials: the short film A Christmas Caper (set before the first movie) and the TV special Merry Madagascar (set between the first and second movies). A Valentine's Day TV special, Madly Madagascar, has been announced as well.

The series is notable for featuring the voices of comedians Chris Rock and Ben Stiller, as well as Friends alumnus David Schwimmer. On March 29, 2009 a Spin-Off called The Penguins of Madagascar premiered on Nickelodeon. It takes place in Central Park Zoo and most notably features the penguins, lemurs, and chimps. Alex, Marty, Gloria, and Melman do not make appearances in the series.

The following tropes are common to many or all entries in the Madagascar franchise.
For tropes specific to individual installments, visit their respective work pages.
Retrieved from "https://allthetropes.org/w/index.php?title=Madagascar&oldid=1830414"
Categories:
Cookies help us deliver our services. By using our services, you agree to our use of cookies.