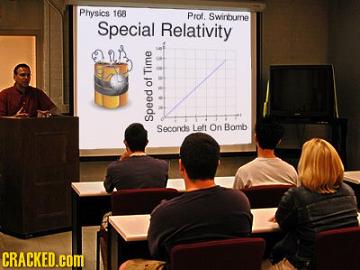 If I ever MUST put a digital timer on my doomsday device, I will buy one free from quantum mechanical anomalies. So many brands on the market keep perfectly good time while you're looking at them, but whenever you turn away for a couple minutes then turn back, you find that the countdown has progressed by only a few seconds.
—Rule #216 of The Evil Overlord List

Any kind of stated time limit or countdown in fiction seems to know when it's Being Watched, and will cheat accordingly for maximum drama. This phenomenon tends to occur especially as a countdown starts approaching zero.

For instance, the large digital readout on a Time Bomb may show thirty seconds to detonation, but after cutting to and from a climactic two-minute fight between The Hero and the Big Bad, the clock somehow has ten seconds left for The Hero to defuse it before it goes off.

This can be done subtly, to stretch things out a bit without the audience really noticing, but in most cases it's pretty obvious—there have been times, in fact, when literally no time passes at all while the countdown's out of shot.

Sometimes the reverse effect takes place—the character has a good forty seconds to stop or get out of the way of the destruction, then six seconds later the timer starts counting down from ten, which is a fairly cheap way of ratcheting up the suspense. This version, at least, can occasionally be justified by the Law of Conservation of Detail - the action we saw isn't necessarily all the action that took place.

This doesn't have to involve an actually displayed timer. Sometimes a character will just yell that "There's only ten seconds left!" and the heroes will prevent the calamity 25 seconds later.

A variation is the fuse or a trail of gasoline which burns slower or faster when the camera's not on it. Another common visual equivalent is the falling object or descending gate which is accelerating down at something. Then the shot cuts just before it hits to people trying to stop it or get out the way. When the camera goes back, the thing will mysteriously have farther to fall than it did before the cut, just enough to allow the characters to make a narrow escape.

This can be handwaved by arguing that part of the fight scene (since rarely are there splitscreens showing the fight and the timer) started when or before the last shot of the timer was shown, thus, the fight and the countdown are happening at the same time chronologically but are shown separately to build tension and suspense (an editing technique known as "cross-cutting").

When applied to a Timed Mission in Video Games, it becomes Always Close (and when applied to non-timed missions in video games, Take Your Time). See also Exact Time to Failure, which may give us the countdown in the first place, and Instant Cooldown or Magic Antidote for the miraculous events that occur when it is stopped. May be also applied to a Descending Ceiling or when The Walls Are Closing In - the crusher keeps conveniently moving back between shots.

In instances where it's not a timer that's out of proportion, but rather the speed at which off-screen travel is conducted, see Traveling At the Speed of Plot.

Often occurs because Talking Is a Free Action.

Examples of Magic Countdown include:

Villain: Now do you believe me, Batman? You can't radio for help because I'm jamming all the channels -- and all the phones are dead as well, so you cannot contact your butler!
Batman: You lousy little maniac!! You're going to tell me how to stop that bomb, or I swear I'll--!
Villain: Really, Batman -- wasting what precious little time you have left on empty threats? Frankly, I had thought you above such childish displays!
Batman: (thoughts) He's right... can't afford to lose control now... have to focus... have to think... there has to be some way to disarm that device...

At this point we see the bomb again, and it's down to 5 seconds left. (Batman does disarm the faraway bomb, by cutting the power at the power plant.)

Mike: "Stop showing the clock! You spent that nickel!"

Daniel: What difference does it make, I mean it's not like you have an actual ticking clock on the screen.
Marty: That's brilliant!
Daniel: That's ridiculous...

Chiun: Of course it's still ticking. I destroyed the bomb, not the clock.