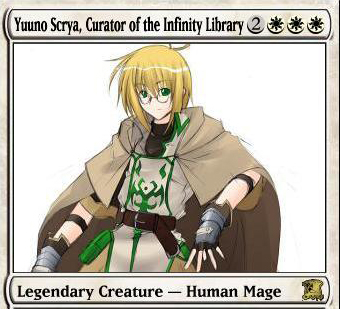 "What do you think of the library?"
"It's pretty big," I murmured, looking all around me.
"Two hundred miles in every direction," said the Cat off-handedly and beginning to purr. "Twenty-six floors above ground, twenty-six below."
"You must have a copy of every book that's been written," I observed.
"Every book that will ever be written," corrected the Cat, "and a few others besides."
"How many?"


"Well, I've never counted them myself, but certainly more than twelve."
—Lost in a Good Book

Books and libraries in fiction can be mystical things; keepers of information, certainly, of secrets and sometimes of magic, as well. It's natural, therefore, that some authors like to spread some of that magic onto the librarian, too—when they aren't making them hot or scary, that is. A magic librarian will very often have the ability to send readers (or people who either don't read or disparage books, to teach 'em a lesson) into the world within the books, and sometimes, pity those who don't return their books to the library before the due date.

Examples of Magic Librarian include: