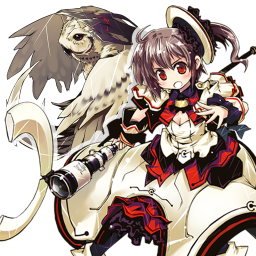 Magical Cannon Wars is a freeware Bullet Hell game for the Android made by RONJI.

Due to the incredibly Blind Idiot Translation it's hard to know exactly what's happening with the plot.

Magical girls are used as weapons of war, as they've been recognised to have talent as soldiers and have been persecuted in their time. Countries try to mass produce the wands necessary for the girls to fight which quickly led to the "Second Magical Girl World War". The girls were all protected by their weapons but 25% of the world's cities were wiped out. The United Nations made a law about the uses of Magical Girls and that magical girls should fight each other in death matches to lower the numbers.

Countries studying Magical Girls have come to the conclusion that with each passing year their power is becoming more and more powerful. The battle between magical girls, "The Battle Of Magic", is starting again and with serious economic recession.

Enemies include various types of magical girls and space ships.

In the end, it all sort of turns out that the United States of America and The Pentagon are the Big Bad who, with laboratory experiments, turned Zero from a good/regular Magical Girl into a dark one. Though it is never explained why. What was never explained was what Nantes has to do with anything and who Kimi (an incredibly strong magical girl) and Yanna are.

Not to be confused with the Magical Girl Bullet Hell game Magical Cannon Girl (though it does get called that).

Tropes used in Magical Cannon Wars include:
Retrieved from "https://allthetropes.org/w/index.php?title=Magical_Cannon_Wars&oldid=1863299"
Categories:
Cookies help us deliver our services. By using our services, you agree to our use of cookies.