Everything About Fiction You Never Wanted to Know.
(Redirected from Magical Computer)
Jump to navigation Jump to search 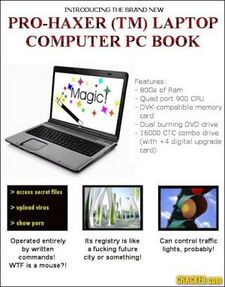 Everyone either owns a computer, or uses them as part of a job, or has been at least exposed to them.

Naturally, this gets spiced up for TV land.

As a result, computers on TV often bear only superficial resemblance to their real life counterparts. In fact, they are often just a 21st-century substitute for magic. A Computer Wizard is a literal wizard. Evoking arcane words with their keyboard, they cast spells into the infinite (and physically real) realms of Cyberspace.

For computers which are literally magical, see Magitek.

The following 52 pages are in this category, out of 52 total.