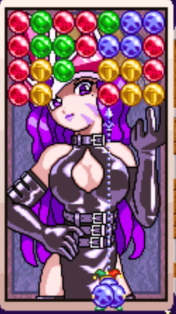 The Empress. Yes, you can play her.

A series of color-matching puzzle games created by the now-defunct Data East. The original game was released in arcades in 1995. The second and third games were created for the Neo Geo MVS system; Magical Drop III was Data East's final Arcade Game. The fourth game, Magical Drop F, was a PlayStation exclusive released in 1999. Magical Drop V, developed by Gogolith Studio, will be released on Steam in 2012.

Magical Drop games put far more emphasis on characters than other puzzle games that make it to the U.S. territory. While other puzzle games have only small animated window dressing around the playfield, if they have characters at all, Magical Drop Uses characters as the background, and in VS. mode, each has several animations to coincide with the action and each even has unique voice samples (At least in the Japanese version).

The characters also control what special moves are available to the player and what chains are needed to execute these special moves. These moves are typically based on the Tarot Card the character is themed for. For example, The Chariot has offensive style special moves, especially in two player. In contrast The Empress is mostly defensive and The Fool's special move does nothing except grant extra points!

Another is the lenient combo system. While other games of this type such as Tetris Attack check to make sure that one group of pieces is DIRECTLY responsible for another matching up before issuing any kind of bonus or streak, Magical Drop is like Klax in that ANY new match is counted into the "chain" until the animation is done and all parts resting on the vanishing blocks fall into place.

However, easy chains do not make this game easy. The game accounts for and even DEMANDS it. Depending on the mode and difficulty, the game will not last long without near-endless chains.

Tropes used in Magical Drop include: