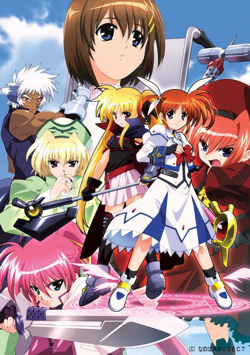 The second season of the Nanoha franchise, set six months after the original series.

Nanoha and Fate are working together with the TSAB to investigate an artifact of incredible power called the Book of Darkness, which has been linked to a number of attacks on magi that have left the victims drained of Mana.

Unknown to them, the Book of Darkness has attached itself to an orphaned girl in a wheelchair called Hayate. She just wants to have a family, and she lovingly adopts the sentient defence programs of the Book- a sympathetic female Power Trio and their Non-Human Sidekick- as her own.

But what Hayate is unaware of is that the Book of Darkness is slowly eating away at her life, and only by feeding it the Mana of others can she be saved. Not wishing to lose their kind master, the servants of the Book go behind her back and attempt to satisfy the Book's hunger on their own, leading them to an inevitable confrontation with Team Nanoha.

Widely regarded by fans as the best season of Nanoha and the only sequel to the original not to have caused a Broken Base in some way. Until previews and info for the movie below started showing up.

It has a supplementary Slice of Life manga and Sound Stages that take place between the episodes. The Namco Bandai game for the PlayStation Portable, The Battle Of Aces, is an Alternate Continuity sequel to A's which changes the events of the last episode. A movie remake of A's, following the continuity of the first movie, is also in the works with an expected release date in 2012.

The anime was dubbed and is available by FUNimation along with the original series.

Tropes used in Magical Girl Lyrical Nanoha A's include:
Retrieved from "https://allthetropes.org/w/index.php?title=Magical_Girl_Lyrical_Nanoha_A%27s&oldid=1715794"
Categories:
Cookies help us deliver our services. By using our services, you agree to our use of cookies.