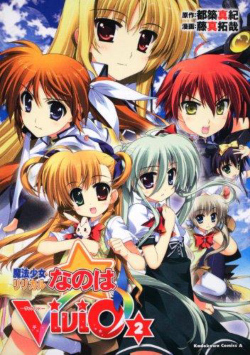 ViVid is actually more a Spin-Off than a true sequel and features Nanoha's and Fate's adopted daughter Vivio (first introduced in StrikerS) as a Magical Girl Warrior that turns into her teenage form when she needs to battle with the power of Sacred Heart - her... bunny plushie Device. That's right, it's a return to more traditional Magical Girl fare, complete with a rival Magical Girl in the form of Hegemon Ingvalt, a king from the era of Ancient Belka similar to Vivio. It also has many recurring characters from StrikerS, including the reformed Numbers cyborgs.

The series is a lot Lighter and Softer than any other incarnation of Nanoha and so far lacks a major antagonist and an over-arcing plot. It is by no means less action-packed though, as it focuses heavily on magical martial arts and feels much like a shonen series with magical girls. So far it's also the most successful in terms of sales figures.

Tropes used in Magical Girl Lyrical Nanoha ViVid include:
Retrieved from "https://allthetropes.org/w/index.php?title=Magical_Girl_Lyrical_Nanoha_ViVid&oldid=1831148"
Categories:
Cookies help us deliver our services. By using our services, you agree to our use of cookies.