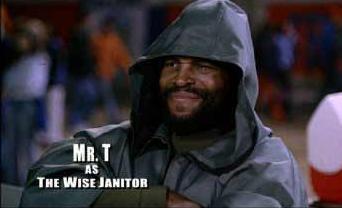 In order to show the world that minority characters are not bad people, one will step forward to help a "normal" person, with their pure heart and folksy wisdom. They are usually black and/or poor, but may come from another oppressed minority. They step (often clad in a clean, white suit) into the life of the much more privileged (and, in particular, almost always white) central character and, in some way, enrich that central character's life. If the Magical Negro (also known as Magic Negro or Mystical Negro) is from a society of Noble Savages, expect an Anvilicious Aesop about the failings of the protagonist's society—which usually leads to the protagonist "Going Native".

With such deep spiritual wisdom (and sometimes—though not always—actual supernatural powers), you might wonder why the Magical Negro doesn't step up and save the day himself. This will never happen. So enlightened and selfless is he that he has no desire to gain glory for himself; he only wants to help those who need guidance...which just happens to mean those who are traditionally viewed by Hollywood as better suited for protagonist roles, not, say, his own oppressed people. In fact, the Magical Negro really seems to have no goal in life other than helping white people achieve their fullest potential; he may even be ditched or killed outright once he's served that purpose. If he does express any selfish desires, it will only be in the context of helping the white protagonists realize their own racism and thereby become better people.

This can work somewhat as An Aesop about tolerance and not dismissing individuals from underprivileged groups, and it's certainly an improvement on earlier tendencies to either never depict minority characters at all or make them all villains. However, ultimately it's usually a moral and artistic shortcut, replacing a genuine moral message with a well-intentioned but patronizing homage to the special gifts of the meek. Minority characters still all too often aren't portrayed as the heroes of their own stories, but as helpers of standard white, able-bodied, middle-class heroes, and they aren't depicted as, you know, actual people with their own desires, flaws and character arcs, but as mystical, Closer to Earth plot devices.

See also Whoopi Epiphany Speech, Black Best Friend, and Mammy. For a similar trope about women, see Manic Pixie Dream Girl (as well as Disposable Woman and The Bechdel Test); the Magical Girlfriend may play a similar role for her love interest, but is not necessarily an example of this. For the gay version see Magical Queer (who may also be black). The disabled version of this is Inspirationally Disadvantaged. When a non-minority character is portrayed this way, the character is usually a Sidekick Ex Machina. Similar in vein to the Magical Native American, though that trope tends to be more explicitly magical. Also similar to Magical Asian, when an Asian character, often with supernatural abilities, fulfills a mentor role to a white character. Another related trope is White Man's Burden, where the plot is about an ordinary white person who befriends an underprivileged minority character.

The term "Magical Negro" was popularized by Spike Lee during a lecture denouncing this trope.

NOTE ON WRITING EXAMPLES FOR THIS PAGE: Merely having supernatural powers is neither necessary nor sufficient to make a minority character an example of this trope. Simply being a minority character who plays a mentor role is also not sufficient. Think carefully before you add a character to this list just because they're black and serve as a mentor and/or use magic.

Examples of Magical Negro include:

Retrieved from "https://allthetropes.org/w/index.php?title=Magical_Negro&oldid=1824934"
Categories:
Cookies help us deliver our services. By using our services, you agree to our use of cookies.