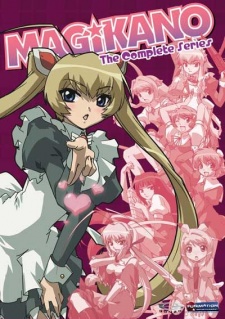 Magikano is a Manga series by Takeaki Momose, which was later adapted into an Anime series directed by Seiji Kishi and written by Hideki Mitsui.

The story centers on Ayumi Mamiya, a witch cursed to lose her powers, and Haruo Yoshikawa, an apparently Ordinary High School Student whose three sisters are witches who use their magical powers to keep him protected and ignorant about the existence of magic. Now Ayumi must wake up Haruo's latent powers to save herself - but his sisters have other ideas.

Tropes used in Magikano include:

Ayumi: It's in her god-damned DNA?!

Yuri: (with a funny smirk on her face): I didn't pick Haruo on purpose, it was a collective decision.

Ayumi: Why am I a witch?
Yuri: Ever heard of typecasting, bitch?