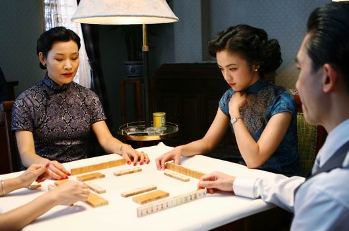 Mahjong (麻將) is arguably the quintessential East Asian gambling game, although it does not require money stakes. It originated in China during the last half of the 19th century, although the exact details of its creation are Shrouded in Myth. It also has numerous variants; common variants with major differences from the Chinese/Hong Kong variants are detailed in their own sections below. It is not to be confused (although it far too often is) with Shanghai (aka Mahjong Solitaire), which is a completely different one-player tile-matching game played with Mahjong tiles.

Mahjong is generally played on a square table, with one player seated on each side, as in contract bridge. The game is played using rectangular tiles, with four identical tiles of each type in the set, and at least 34 different tiles, for a total of at least 136 tiles.

(Note: Where possible, terminology will use the names most commonly seen in English-language editions of the game.

The set of tiles contains three regular Suits, with individual tiles having a value from one to nine:

As well as those, there are also the Honor tiles:

Sometimes additional tiles are optionally in use:

A game is divided into hands and rounds. Each round is assigned a direction, beginning with east and progressing through south, west, and north in that order. Each player is also assigned a direction, referred to as their seat. The East seat opens every hand; at the end of each hand, the seats rotate anticlockwise (so that East becomes North, South becomes East, etc) unless the hand was won by East or ended in a draw. A round ends when the East seat returns to the player who started as East. The game ends after four rounds have been played.

Each player stacks one-quarter of the tiles in a wall in front of him, two tiles high and all facing down. Then, the dealer rolls the dice to determine which wall is broken and where, and the deal starts at the breaking point, for a result similar to cutting a deck of cards. Each player is dealt a hand that usually has 13 tiles. After the deal, play starts with the dealer. Each player, on his own turn, draws the next tile from the wall. If he does not have a complete hand, he discards one tile, and play continues with the player on his right. The object of the game is to be the first to make a complete hand consisting of a pair and four sets usually consisting of three tiles each. Possible sets are:

When a player discards a tile, another player may claim it to form a set if they already have two (for a shueng or pong) or three (for a kong) of the needed tiles in their hand. If a tile is claimed in this manner, play immediately jumps to the claimant. The set made by a discard must be set aside and revealed to the other players; the tiles in it may not be discarded.

A tile may only be claimed for a sheung if it was discarded by the player on the claimant's left (unless it is the final tile needed to win). A tile discarded by anyone may be claimed for a pong or kong. If multiple players claim a discard tile, a player claiming it for a pong or kong is given priority over one claiming it for sheung, and one claiming it as the final tile for victory has priority over all others. The first player to form a complete hand, with four sets and a pair, wins the hand.

If a flower is drawn, it is set aside and a new tile drawn. Flowers may be worth points at the end of a hand. Each one corresponds to a direction: East is 1, South is 2, West is 3, and North is 4.

Because the Chinese words for "four" and "west" are both similar to the Chinese for "death" (observant players will have noticed that these two ideograms are very similar; one Chinese metaphor for death is "to return to the west"), superstitions have grown around this:

The winning hand is awarded points for patterns and winning conditions, then these hand points are converted to Scoring Points, usually on an exponential scale. If the hand was won by a discarded tile, the discarding player pays the value of the hand to the winner. If the hand was won by a tile drawn from the wall, all three players pay the winner; how the value is split up or duplicated depends on the variant. If the dealer is the winner, he keeps the dealer button for an extra hand. If there are not enough tiles left in the wall and nobody has won, the hand ends in a draw; in most variants, this occurs at 14 tiles left. In the event of the draw, the dealer usually keeps the dealer button. Being the dealer often has scoring advantages, although the specific advantages depend on the variant.

The following bonuses are correct in the Hong Kong variant; other variants may have some differences, but scoring is generally pretty similar. Scores are cumulative, so you get points for each condition satisfied.

Unlike most other variants, a typical Riichi match consists of only two rounds, East and South, and it is not uncommon to play a one-round game with only the East round.

In the event of victory by self-pick, the payment of the point value of the hand is split amongst the other three players. If the winner is the dealer, each opponent pays half the base value of the hand, for a total of 1.5x the base value. Otherwise, the dealer pays 1/2 the value of the hand, and the other 2 opponents pay 1/4th of the value. All payments are rounded up to the nearest 100 points. If the dealer wins by discard, his hand value is multiplied by 1.5x. Additionally, there is a honba count that starts at 0 and increases in increments of 1 every time the dealer wins a hand or a hand ends in a draw, and is reset to 0 every time a non-dealer wins a hand. The winning player gets an additional 300 points per honba; if he won by self-pick, this is split up with each opponent paying 100 points.

Sanma is heavily based on Riichi, but modified for three players. The primary differences from Riichi rules are:

Unlike most other variants, Taiwanese Mahjong uses 16-tile hands, and a completed hand has five sets (instead of four) plus the pair. The hand points to Scoring Points conversion is also done linearly instead, with a base value for winning and an additional point value per hand point; these two values are set by House Rules. For a win by self-pick, the hand gets one additional point, then all three rivals pay the full value of the hand.

Mah Jongg was first imported to the United States in The Roaring Twenties, and became a huge fad. While the fad died down somewhat in The Thirties, a variant game developed which was eventually codified by the National Mah Jongg League (NJML), formed in 1937. Among the differences:

Notably, the NJML was founded by primarily Jewish players, and even today in the US many Mah Jongg players are of Jewish descent.

A recording of the song by the Memphis Five with Billy Jones is on YouTube here.

Retrieved from "https://allthetropes.org/w/index.php?title=Mahjong&oldid=1871323"
Categories:
Cookies help us deliver our services. By using our services, you agree to our use of cookies.