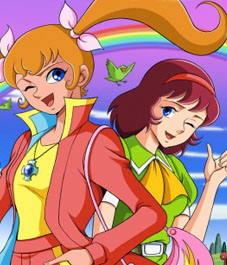 Majokko Tickle is an early Magical Girl series created by Go Nagai, airing from 1978 to 1979.

Tiko, a shy Japanese schoolgirl, receives a book as a gift from her father on her eleventh birthday. When Tiko opens the book, she releases Tickle, a mischievous fairy who was imprisoned inside the book for playing pranks on people. Tickle spends the series living with Tiko (having cast a spell so that the family believes she's Tiko's sister), using her powers to solve everyday problems, and of course playing tricks on people, particularly Tiko's annoying kid sister, Hina.

Tropes used in Majokko Tickle include: