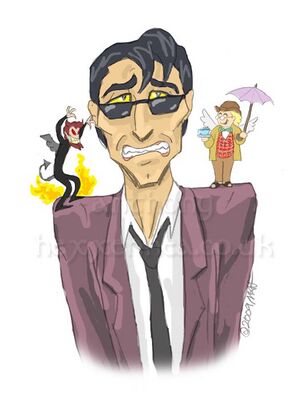 Raphael: You gave me quite a fright, you did. Usually one person doesn't get hurt quite so badly, but you've always had to go above and beyond, haven't you? ...And you never visit anymore, and I can't believe you never mentioned your demon boyfriend.

Manchester Lost by JAMoczo is a very funny Good Omens Crack Fic / Action Adventure / (non-explicit) Slash Fic in which Aziraphale is captured by Hell and Crowley, War and the Archangel Michael (on a Mission from God) break in to save him and set off a second apocalypse. It introduces entertaining characterizations of other angels such as Michael, Raphael (Aziraphale's adopted father), Gabriel, and Uriel. It's a self parodying Affectionate Parody with many interesting twists and turns along the way.

It is technically a sequel to How Crowley Fell Out of Love with the Bentley (which is a sequel to Good Omens). Manchester Lost has a sequel itself, which is complete: Paradise Thwarted.

Tropes used in Manchester Lost include:

Raphael to Lucifer: "And I know you have a very strong fondness for... er... sharp, pointy things, and so help me Light-Bringer but if you don't let me keep this child I will mount your immortal head on one of those sharp pointy things outside my office as a reminder to everyone that even though I am the Healer I am not a pansy!"

Michael: Wait, it needs something. Wait, I know - ambiance!
Music: You're the best, around! Nothing's gonna ever keep you down!

Raphael: Perhaps you can skedaddle back to Hell and tell him to call things off? It would be awfully sweet of you. No one wants existence to be over, especially since my son's boyfriend would be destroyed too.

Beelzebub: That's it, he's not coming anywhere near my Hell.