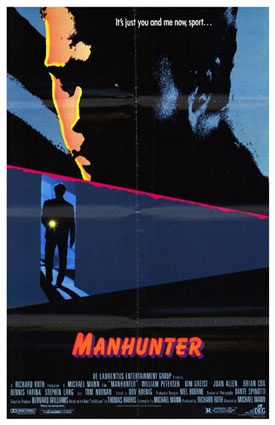 The first Film of the Book of the Thomas Harris novel Red Dragon, this 1987 film features Hannibal Lektor (note the spelling) as played by Brian Cox. Like in Silence of the Lambs, he is used to help an FBI investigator. His name is Will Graham and he is trying to find a serial killer known as Francis Dollarhyde, nicknamed "The Tooth Fairy". As he tries to find the serial killer, Graham's personal demons start to haunt him, affecting his work and his relationships.

A box office flop on release, despite critical approval. It has become a Cult Classic for many Hannibal fans. The lead investigator is played by William Petersen, feeling at times like an extended audition for his CSI role.

The film relied on heavily-tinted scenes and overpowering music. The use of "In-A-Gadda-Da-Vida" is very strange to anyone who has ever seen its use in The Simpsons (it times at 17 minutes and 1 second on the album) and looks very much like a movie from The Eighties.

Not to be confused with Sierra's series of adventure games with the same name, or the comic of the same name.

Tropes used in Manhunter (film) include:

Graham: And you know you need a bolt-cutter and every other Goddamn thing. Because everything with you is seeing, isn't it? Your primary sensory intake that makes your dream live is seeing. Reflections. Mirrors. Images. .... You've seen these films! Haven't you, my man?

Lecktor: You want the scent? Smell yourself.

Jack: You feel sorry for him.
Will: As a child, my heart bleeds for him. Someone took a little boy and turned him into a monster. But as an adult... as an adult, hes irredeemable. He butchers whole families to fulfill some sick fantasy. As an adult, I think someone should blow the sick fuck out of his socks.