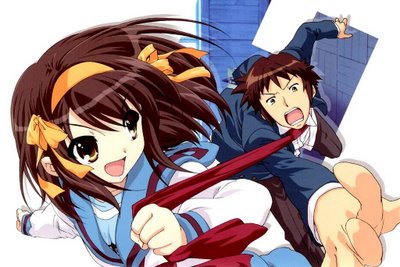 She'll liven up your life whether you like it or not!

Let's say you're a soulful, brooding male hero, living a sheltered, emotionless existence. If only someone—someone female—could come along and open your heart to the great, wondrous adventure of life...

It's Manic Pixie Dream Girl to the rescue!

The Manic Pixie Dream Girl is there to give new meaning to the male hero's life. She's stunningly attractive, high on life, full of wacky quirks and idiosyncrasies (generally including childlike playfulness and a tendency towards petty crime), often with a touch of wild hair dye. She's inexplicably obsessed with our stuffed-shirt hero, on whom she will focus her kuh-razy antics until he learns to live freely and love madly. From the girl's perspective, this trope becomes Single Woman Seeks Good Man, though whether the hero qualifies varies.

May be featured as the Second Love, in order to break the character out of The Mourning After.

Subtrope of Blithe Spirit. Related to Magical Girlfriend, Cloudcuckoolander, Genki Girl, Perky Goth, Strange Girl, Damsel Errant, Uptight Loves Wild, Loony Friends Improve Your Personality, and POV Boy, Poster Girl. Compare Magical Negro, where a black character plays a similar (but non-romantic) role in helping a white protagonist get over their issues and learn to love life. Contrast Yamato Nadeshiko, and Yandere (though when Played for Drama, Subverted, or Deconstructed, she may turn out to be one). Sometimes is a Sidekick Ex Machina. Contrast Nerd Nanny.

May be used as a cheerful variety of Threshold Guardians, all the way from less uptight to psychopomps happily welcoming their clients into "another adventure".

Although it's a long-standing trope (one pundit wondered if Eve was Adam's MPDG), the term was coined by film critic Nathan Rabin in 2005. He found it grating, and Anita Sarkeesian of Feminist Frequency pointed out that it allows creators to disguise their Shallow Love Interests with a veil of spontaneity. Fortunately, Tropes Are Not Bad, and others have been able to take the archetype in more complex directions, up to and including making the MPDG the protagonist of their works. However, Rabin disagrees, and says that the trope has now moved well beyond his original intent -- Death of the Author very much applies here.

Retrieved from "https://allthetropes.org/w/index.php?title=Manic_Pixie_Dream_Girl&oldid=1954920"
Categories:
Cookies help us deliver our services. By using our services, you agree to our use of cookies.