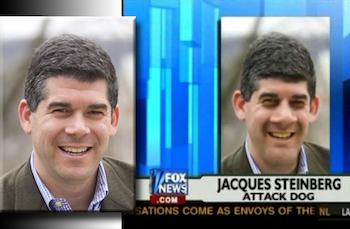 Reality TV shows thrive on conflict between the contestants. Theoretically, the conflict is more gripping because it's real, with no scriptwriters, second takes, or most importantly editors. Everything that happened really happened, just as it's shown.

If you believe that, Trope Co has a bridge to sell you for cheap with a great view of Brooklyn.

In point of fact, there are reality TV writers, there can be "OK, can you say that again, only this time with more emotion", and there are certainly editors. While the specific events may be outside of the producers' direct control (although that varies depending on the show, and don't count out less direct influence), each episode of reality TV often compresses days into 44 minutes...and how the events are compressed can change a scene, a contestant's attitude, and alter "reality" to the point that it's barely recognizable as such to those who were there.

Common forms of Manipulative Editing include:

Like pretty much anything on television, Charlie Brooker has referenced it in his show, and showed how easy all of the above can be done. The YouTube nerds have put the footage here.

Examples of Manipulative Editing include:

Retrieved from "https://allthetropes.org/w/index.php?title=Manipulative_Editing&oldid=1638456"
Categories:
Cookies help us deliver our services. By using our services, you agree to our use of cookies.