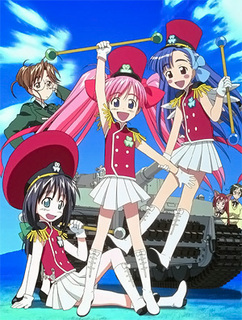 Mao-chan is a 2002 original anime by Studio Xebec, written by Ken Akamatsu (post-Love Hina, pre-Mahou Sensei Negima) and directed by Yoshiaki Iwasaki. A follow-up manga was illustrated by RAN.

What do you do when Japan is under attack by Ridiculously Cute Aliens? Fight back with even cuter kids! Mao Onigawara, Misora Tsukishima, and Sylvia Maruyama, three third-graders, are tasked with protecting Japan's national landmarks from the aliens... and keeping their grandfathers, the heads of the Ground, Air, and Naval Defense Forces, respectively, from fighting with one another about which one is superior, a problem that often gets in the way of their jobs.

Tropes used in Mao-chan include:
Retrieved from "https://allthetropes.org/w/index.php?title=Mao-chan&oldid=1903629"
Categories:
Cookies help us deliver our services. By using our services, you agree to our use of cookies.