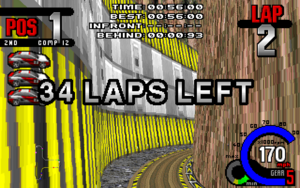 So, you've been spending about four hours charging through the Bonus Dungeon. It must be over soon, right? It's been about sixteen rooms worth of dungeon, you've fought past at least three Mini bosses, battled heroically past hordes of Goddamned Bats and Demonic Spiders and just have to be near the boss, right?

Nope, this is the Marathon Level, which means getting from start to finish is gonna take some doin'. The Marathon Level is to a dungeon what a Marathon Boss is to a normal boss: one that is incredibly long, and takes a huge amount of time to complete; e.g., a one hundred floor tower, or something similar. Heck, most examples of this are either the Bonus Dungeon or Very Definitely Final Dungeon, and at least half are literally a hundred floors high or deep.

While Marathon Levels can be easy to hate, don't judge them too harshly. These levels can be some of the best-designed levels in the game (sometimes), though they can also be susceptible to Space Filling Paths and Cut and Paste Environments. If you're particularly unlucky, a Marathon Level may end with a Marathon Boss. This trope is almost a given if it has a name like 'Cave of Ordeals'. A Marathon Level may arise from an attempt to prevent Unwinnable by not allowing saving where the player could easily become stuck, such as a Timed Mission or dungeon that can't be left until it is finished.

See also Marathon Boss, the boss version. Not to be confused with a level in Marathon. Check Point Starvation can make these levels quite maddening, and heaven help you if it's combined with Bladder of Steel.

Examples of Marathon Level include:

Retrieved from "https://allthetropes.org/w/index.php?title=Marathon_Level&oldid=1936812"
Categories:
Cookies help us deliver our services. By using our services, you agree to our use of cookies.