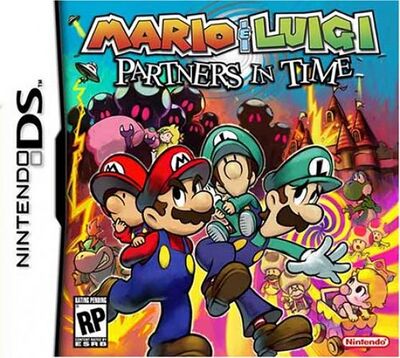 Mario & Luigi: Partners In Time is the second game in the Mario & Luigi RPG series, released in 2005 for the Nintendo DS. The Japanese name is Mario and Luigi RPG 2x2.

The game changes a few game mechanics from the first one, and teams the brothers up with their time-travelling baby selves (who otherwise appeared in the Yoshi's Island games) using hilariously bad time travel "logic". Princess Peach travels to the past and is promptly kidnapped when the Mushroom Kingdom of the past is invaded by the alien Shroobs. Our Heroes go into the past to find her and have to collect the crystal shards that formed the Cobalt Star that was used to power the time machine in the first place while teaming up with their infant selves as well. Other than that, it's still pretty much the same game with witty dialogue and funny animations and some limited usage of the DS's features. The move-sets were altered to give each pair (bros and babies) unique items and moves, such as only the babies using hammers, and the Bros. moves in battle have been replaced by Bros. items instead.

Tropes used in Mario & Luigi: Partners In Time include:
Retrieved from "https://allthetropes.org/w/index.php?title=Mario_%26_Luigi:_Partners_In_Time&oldid=1881028"
Categories:
Cookies help us deliver our services. By using our services, you agree to our use of cookies.