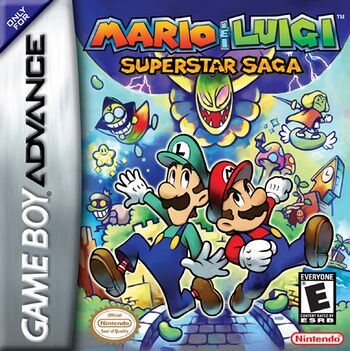 The first game in the Mario & Luigi series, released in 2003 for the Game Boy Advance and was remade in 2017 for the Nintendo 3DS as Mario & Luigi: Superstar Saga + Bowser's Minions.

In one of the most elaborate (original) games made for the Game Boy Advance, Mario is sent to the Beanbean Kingdom, which conveniently adjoins the Mushroom Kingdom. Luigi reluctantly goes along after Mario and Bowser join forces. The Big Bad Cackletta reportedly has stolen Princess Peach's voice (yes, her voice) in order to activate the Beanstar, an artifact with the power to grant wishes.

The 3DS version improves things by providing a graphical overhaul and a remixed soundtrack. The stats for nearly all of the enemies have been lowered and the cost for the Bros. Attacks have been increased. A few other balancing issues include changing the effects of certain pieces of equipment, modifying the restorative items to where using an Ultra Mushroom isn't as effective as a Max Mushroom, and adding a sound test. The main story largely the same as the original; save for the inclusion of Minion Quest, which serves as the explanation for Bowser's amnesia and a few other details to the plot.

The dialogue is sparklingly witty and self-aware. There's The Dragon Fawful, for example, the baddie who talks in deliberate Engrish in the localization. And the endless commentary on Luigi's second-fiddle status. Also, the audio ends up Speaking Simlish pretty convincingly.