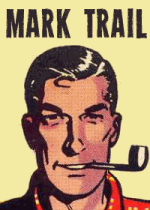 Mark Trail is one of the Print Long Runners of newspaper comics, first introduced in 1946 and written by Ed Dodd. The comic focuses on Mark Trail, a photojournalist and outdoorsman for a magazine. His assignments always lead him into danger and misadventures in the Lost Forest National Forest. Joined by his friends and family there, most strips had him discovering some environmentally unfriendly evil-doer that he would punch out, and then tell about the endangered animal of the week.

It's often poked fun at by The Comics Curmudgeon, and is ripe Snark Bait due to its over-the-top green aesops. Also notable for demonizing the endangered elephant into something that is a danger to all in one strip.

Tropes used in Mark Trail include:
Retrieved from "https://allthetropes.org/w/index.php?title=Mark_Trail&oldid=1759843"
Categories: