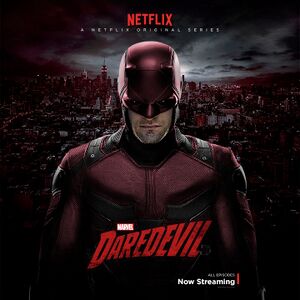 Marvel's Daredevil is a 2015 Netflix exclusive series starring Daredevil set in the Marvel Cinematic Universe. After an excellent reception it was greenlit for a second season, which premiered in March 2016.

Season 1 opens with Nelson and Murdock taking the case of Karen Page, a secretary accessed of murder after being found covered in blood standing over a dead body while clutching a knife, after being alerted by Nelson's childhood friend cop that she is a potential case for Nelson and Murdock. Sensing a Revealing Coverup Murdock decides that their new firm take the case (over Nelson's objections that Page can't afford to pay them). Murdock is correct and the three find themselves deep in a plot by organized crime.

Tropes used in Marvel's Daredevil include:
Retrieved from "https://allthetropes.org/w/index.php?title=Marvel%27s_Daredevil&oldid=1686851"
Categories: