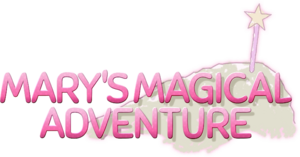 Don't let this logo's girlyness fool you, the game isn't quite like what this implies...

Based on a modified version of Doom‍'‍s engine, Mary's Magical Adventure is a first-person platforming game with two playable characters. Both have the same story and levels, but have different abilities and weapons.

The game can be downloaded at The X Site, Xane's website, for all three main computer operating systems, and can also be played on Android, lag aside, using Delta Touch.