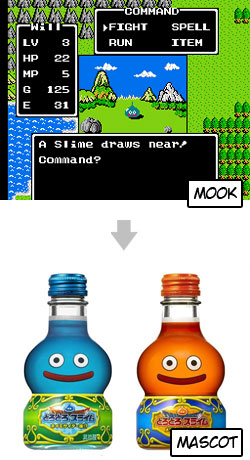 Most Mooks exist solely to die en masse by the hero's hands.

Some become famous in the process, and the result is a Mascot Mook.

This enemy is a spotlight stealer compared to the rest of a game's bestiary, combining the ubiquity of the Mook with the iconic appeal of the Mascot, becoming their very own symbol or icon of the series in the process.

What makes a Mascot Mook so memorable? Perhaps there's a certain charm about this creature's design, or maybe its Fun Size, which prompts a smile across the player's face every time one of these pops up—despite how often they will suddenly pop up or how many of them the player will slaughter throughout the game.

Whatever the case, these Mooks have somehow become just as vital to the series as a whole as your core party members are to the narrative of each separate installment. Fans silently expect this Mook to appear somewhere in each and every installment (often in multiple versions), simply because it always has, and no new game would be fit for release without its appearance.

Sometimes the popularity of the Mascot Mook can result in spin-off titles dedicated entirely to them; see Breakout Mook Character. See Recurring Element for non-monster examples.

Examples of Mascot Mook include:

Retrieved from "https://allthetropes.org/w/index.php?title=Mascot_Mook&oldid=1897151"
Categories:
Cookies help us deliver our services. By using our services, you agree to our use of cookies.