Everything About Fiction You Never Wanted to Know.
< Mass Effect‎ | Characters
Jump to navigation Jump to search

This page is for listing the tropes related to Commander Shepard, protagonist of the Mass Effect series.

For the pages listing tropes related to Party Members, NPCs and Antagonists in the trilogy, see the Mass Effect Character Index. 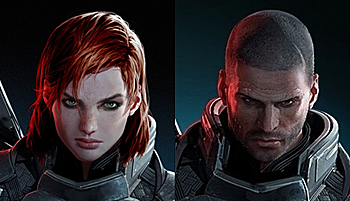 "You can fight like a krogan, run like a leopard, but you'll never be better than Commander Shepard!"

The Player Character, a human Systems Alliance Marine and graduate of the N7 special forces program whose gender, appearance, and outlook are determined by the player. In the first game, Shepard is selected to be the first human Spectre, an elite agent of the Council. After stumbling upon a Prothean Beacon and Saren's plans, Shepard sets out on a quest to stop Saren and save the galaxy from his attempts to bring back the Reapers.

In the second game, Shepard is killed in a surprise attack by the Collectors. But since s/he's too valuable to let stay dead, Shepard is resurrected by Cerberus. After forming an uneasy alliance with the extremist group, Shepard begins building a team for a suicide mission to stop the Collectors and their mass-human abductions.

In the final game, the Reapers began their final assault on the galaxy, and it's up to Shepard to rally the disparate peoples of the galaxy together in their darkest hour to repel the threat of extinction.

The following tropes appear in-game (note: the majority of these tropes apply no matter which version of Shepard is played, though there are a few that are exclusive to the female version):

Retrieved from "https://allthetropes.org/w/index.php?title=Mass_Effect/Characters/Commander_Shepard&oldid=1886463"
Categories:
Hidden category:
Cookies help us deliver our services. By using our services, you agree to our use of cookies.