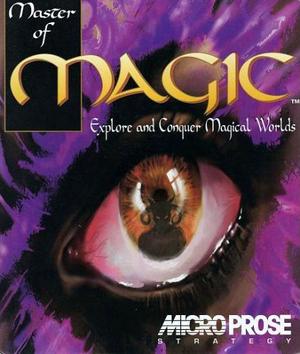 Master of Magic is a 1993 4X game from the makers of Master of Orion that enriches the usual world domination schtick with a spellcasting system, tactical combat and various details such as hero units and Item Crafting.

The players picks or customizes a wizard, founds a city with one of the standard fantasy races, and goes on to crush all competing wizards in the coterminous worlds of Arcanus and Myrror. Options are military force and researching and casting the Spell of Mastery. Mage or no mage, it's as necessary as usual to found cities, levy taxes and build armies. Moreso, in fact, as here the wandering monsters might breathe fire and the goody huts are dungeons.

Magic is divided neatly into Life, Nature, Sorcery, Chaos and Death (white, green, blue, red, black). A Technology Tree is replaced by researching spells in a wizard's chosen field or fields, which can range from sparklers in three or four to planet-crackers in one. Mana, generated from some city buildings and constantly contested mana node tiles, is used to fuel and maintain spells. There are battle spells, utility spells, unit enhancements to make scouts invisible or ships fly, caster units, summoned beings, enchanted items, city spells and terraforming, world spells that can control the winds or block out the sun, etc. One of the possible win conditions is--you guessed it--casting a certain spell. It's enough to make one forget that the whole thing looks almost exactly like a fantasy version of the first Civilization.

Master of Magic only held together after patching - in the pre-WWW era - and has more GameBreakers than you can shake a stick at, but is still fresh and offers numerous things to fiddle with. The in-game help system is marvelous. The game remains appreciated and has the odd Spiritual Successor, particularly the Age of Wonders series, which is similar in having tactical combat, Item Crafting and "research from random spellbook" approach, but weaker non-linearity factors.

Stardock was in talks as of 2007 to make a sequel, Master of Magic 2, but these talks broke down. Instead, they made a Spiritual Successor, Elemental War of Magic, which has been released in 2010.

Another Spiritual Successor has been released in May of 2012, this time by Paradox and Ino Co, titled Warlock: Master of the Arcane, which uses a hex-grid map and combat system very similar to Civilization V.

Tropes used in Master of Magic include:

Retrieved from "https://allthetropes.org/w/index.php?title=Master_of_Magic&oldid=1948682"
Categories:
Cookies help us deliver our services. By using our services, you agree to our use of cookies.